“If the injustice is part of the necessary friction of the machine of government, let it go, let it go; perchance it will wear smooth – certainly the machine will wear out… but if it is of such a nature that it requires you to be the agent of injustice to another, then I say, break the law. Let your life be a counter-friction to stop the machine. What I have to do is to see, at any rate, that I do not lend myself to the wrong which I condemn.”

The quote above got the attention of law enforcement circles in my county. I haven’t been able to gather all of the details of who exactly is watching my facebook feed or why. This article is the first in an attempt to figure out which local cops are attempting to police not the lawlessness of the people, but the ideas of the people. Chilling the first amendment is one step too far for me.

The post above, the Henry David Thoreau quote,  was originally put up by my friend DeeAnn. She is someone I have known for many years. She is a successful businesswoman who lives in Tennessee, obsessed with helping people reach their full creative potential. She came from a similar evangelical background as I did, but we shared a few years where our sense of who God is and what He is up to changed our lives in remarkably similar ways. We shared that intellectual and spiritual journey together — via tweets and messages and occasional meetups over the years. She was a Vanderbilt basketball player, she towers over me and she is usually wearing high heels too so that doesn’t help my confidence much when we hang out.

She comes from an extremely conservative but up-and-coming part of Tennesee. Our political evolution has overlapped a lot over these years as well.

That is simply the honest origin of where my head was at when I thought that this was a meaningful quote to repost on my wall, in the midst of our historic-social-breakdown-of-the-week.

Here’s a message I sent Sunday to my friend who understands the internal workings of law enforcment in ways that I can’t specify, about what happened:

“Bro, I’m not supposed to tell anyone but I’m livid. [Redacted, but a person I trust] got a call from [Law Enforcement Connection] a couple days ago, some “circle of law enforcement” was passing around my post of the Henry David Thoreau quote I shared last week, because it said something about breaking the law. “I know he’s a good kid, but this post is concerning.” [Person I Trust] pushed back, asked to see it, told [Law Enforcment Connection] it’s a well-known literary figure blah blah blah. The point is: Homie, I’m not gonna rest. They will literally have to lock me up if they expect to chill my first amendment rights. I will relentlessly use every ounce of energy and influence I have to figure out who the fuck gets off skimming my posts and suggesting that I’m, well, what even are they suggesting that I’m trying to start a riot? I assume that is the suggestion. [Person I trust] was nervous to tell me because he knew I would snap, and he has asked me not to say anything about [LEC] directly, but I’m gonna keep pressing on shit like this, and I’m going to name and expose every goddamn dirty fucking deputy I can find.

It could be that I’ve been working too many hours keeping my business afloat during a global pandemic and massive social breakdown, but doesn’t this legitimize EVERY concern about over-policing a person has ever had? I don’t know man, I already got called out by the Democrats a couple of years ago over pro-weed posts, now it’s fucking law enforcement thinking they can cancel me? They can suck my dick. Sorry if my rhetoric is shrill, but I’m over here trying to tell my simple little truth about how I feel about making one’s voice heard, and I get that the Democrat club might not want a super divergent thinker, but for law enforcement to suggest I’m some sort of dangerous radical? The threat of law enforcement is the threat of imprisonment or suspension of rights, the democrats could never really do shit to me. I mean I am a dangerous radical, but not in any way that merits police investigation especially over a fucking Henry David Thoreau quote. Good fucking lord, these bozos are brain dead! Bro, I appreciate you, I just wanted to lay it out for someone who can understand the internal dynamics. I’m not asking for any help but just wanted you to know that story . . .  [redacted].”

The story about myself being cancelled by the democrats isn’t really relevant to this story, other than it was the first time mouth-breathing local folks misinterpreted my authenticity for iconoclasm. I was part of the institution by being present with these folks and I was being asked to be the president of their club, so it was annoying for my thoughts to be twisted as if they were intended to rip apart the community. This happened at the beginning of 2017. This was after the Democratic National Party had voted to add the legalization of medical marijuana to the party platform, and about a year before our county voted overwhelmingly in favor of legalizing marijuana in missouri.

When they told me that nobody would support me for club president despite having begged me to accept the nomination a few days before and the current president saying she would be happy to see me as the next president, I didn’t survive the last minute vetting of their Facebook digging. They had printed off and cut out my posts from many months before to show me why my nomination was no longer tenable for the cabal. They were concerned because there was a Judge in the club (Shawn McCarver — who switched parties after this incident) and the sheriff was also a member of the club and he couldn’t have a club president with such ideas (the sheriff switched parties just last year). Not really long-term thinkers, the local democrats.

The democrats should have rallied behind that mildly progressive message that i didn’t refused to conceal or shy away from (I’m very happy to live in a free country where I can say what I want), instead they ran me off and I immediately resigned from the other position I had in the democratic party as vice-chair of the central committeel. Because fuck ’em. You don’t want me, and I don’t need you: Goodbye.

LMAO, who the fuck even prints out Facebook posts?

It’s funny because this moment is essentially the same type of bullshit just from the conservative side, except the threat is significantly greater — as I highlighted in the message to my friend. Policing across the nation has fused entirely with the conservative movement, and the conservatives are oddly comfortable with Fascist threads of thought. My friend Cody was telling me that the last time ANTIFA was considered a terrorist organization was in Facist Europe during World War II. I’m just nowhere near convinced that ANTIFA is a cohesive movement — it’s an ideal set.

How many actual conservatives have disowned the guy? I don’t know how things like this happen historically, and with the risk of fulfilling Godwin’s law in the first issue of this zine: Is anyone sure that Trump isn’t a Facist? He seems incredibly comfortable, since before he was elected, with giving the finger to the checks and balances we have built into our system of government. Just today he suggested that a 75 year old man who was ran over by a line of militarized riot police had it coming.

I think Trump is an existential threat because of how radicalizing his influence has been on every conservative, but on local law enforcement particularly. I mean, is anybody reaching out about my Facebook posts if Trump isn’t tweeting a couple days before that ANTIFA is a terrorist organization and creating a narrative where local hippies and progressives are somehow going to start killing cops in the street and chucking bricks through windows? We live in a town of 20k, that includes the prisons and state hospital and yet I was arguing with local idiots on some community page about how the protests will not be violent and I’m so confident that even though I own property on the square I was still going to participate in the protests across the street. My family, and a handful of others, were the only people at risk of absorbing any property damage and I wasn’t jerking off online about looter-shooting fantasies.

It’s bizarre how much people want to externalize their hatred of other ideas. Let’s fantasize about running people over or blowing holes in trespassers, even though the only statement that these BLM-Supporters have clearly and resoundingly made is that they want to make their voice heard in their community. A fucking act of patriotism no matter what your politics are.

Protests are romantic to me because of the emphasis on weakness. You protest when you feel like you have no other option.

Protests are just you and the community who also feels passionately communicating to the part of the community that may not feel as passionately. It’s about representation. Riots are maybe a different thing, but until that happens locally I won’t attempt to grasp all the dynamics there.

A good friend of mine is a black male who had no real interests in the protests but lives locally and has for years. A professional, middle aged dude. I was talking to him about everything going on, not law enforcment watching me just the riots and protests, and the subject of Straight Outta Compton came up.

He said: “When that movie came out and I was watching it, I remembered when the album came out and my friends got in an argument. The black dudes knew exactly what Eazy-E was talking about, they had all been stopped and harassed by the authorities at different times. The white dudes legitimately had no idea.”

I didn’t ask him if I could share that so I won’t say much more, but the point is, you don’t have to be any sort of radical to affirm that the state isn’t always just, that sometimes they are just fucking with citizens because they can, and that the heart of the protests are likely American Idealism in its original glory and with the potential to affect important change in our communities.

The idea of “Blue Lives Matter” as a response to “Black Lives Matter” is such nonsense and will ultimately be the downfall of that institution. If it isn’t the downfall, then we are moving towards a dark time where vocational interests outweigh human rights interests not only secretly and covertly (like the drug war) but openly with rhetoric where children will learn directly to dismiss the concerns of the oppressed out-of-hand. 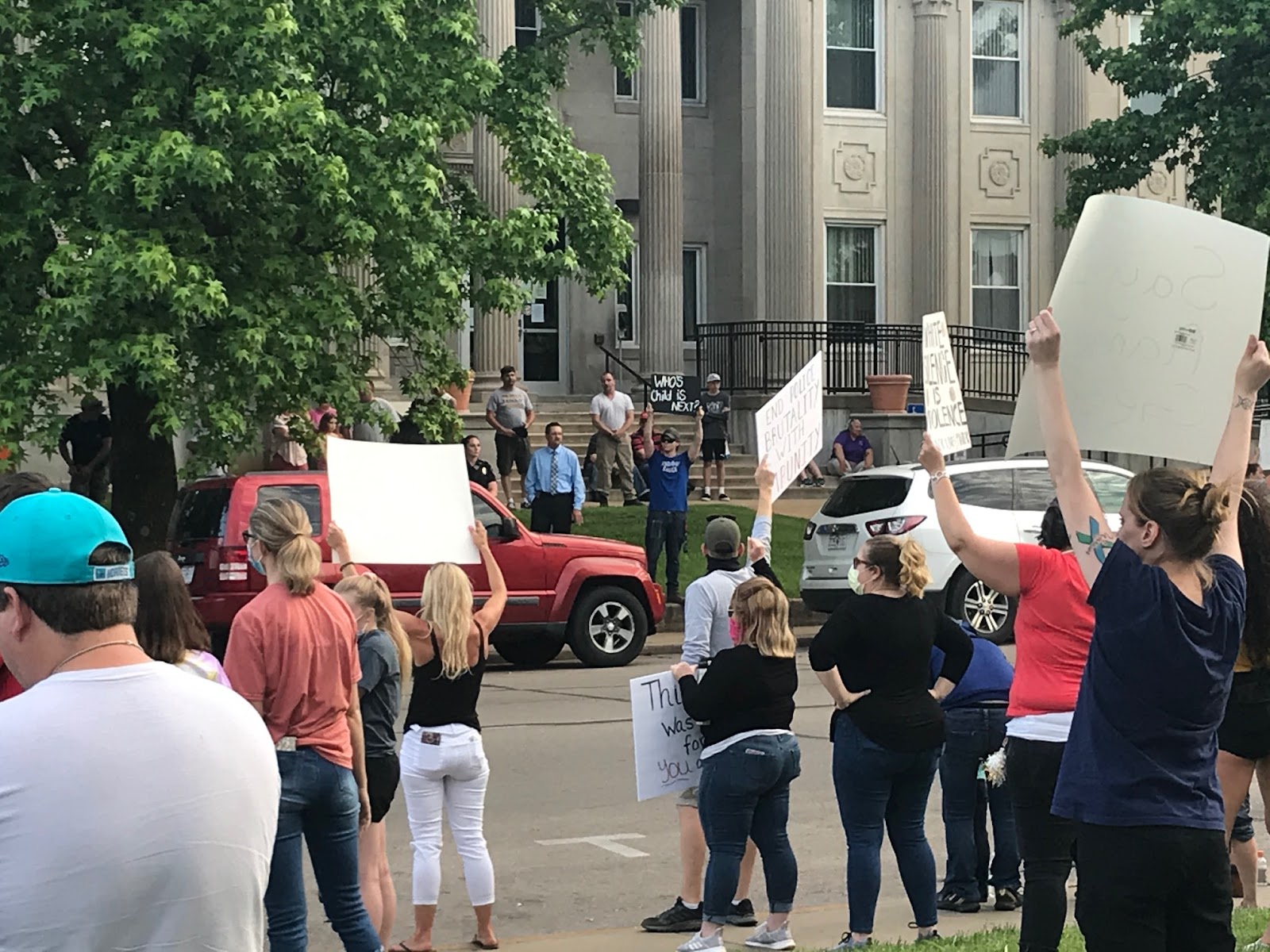 We want to raise children, we want to build a community, where ideas are expressed and discussed and people are encouraged to be sensitive and empathetic, not dismissive and defensive.
It’s like any one of the ten thousand police brutality videos you can watch, police can’t adopt a posture of pure defensiveness when the police are the ones with qualified immunity and state-issued lethal force. How many times do you see cops getting in people’s faces, talking shit, when those poeple shouldn’t even be detained in the first place? They are challenging “suspects” who, if that individual responds to the officer’s invitation for violence, the individual could be immediately gunned down and the state would applaud and keep paying that fucker to eventually pull your kid over on some random Friday night.