I grew up in the 90s, inundated with commercials and corporate slogans. I yearned to live somewhere besides Farmington. I harbored frustration towards my parents for not moving to some more civilized area, with some shopping — synonymous to my consumerized child brain for “culture.” 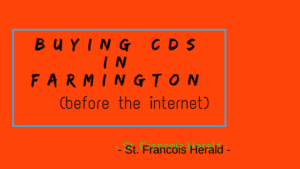 You couldn’t buy CDs in Farmington. There was, I think, one place near JC Penny’s that had some CDs. I think my brother bought an album there. But every other CD had to be purchased at WalMart, which meant it was a shitty edited version. I hated the moralism of WalMart, as a kid. They wouldn’t sell albums with cursing, which I guess was a way to pacify the evangelical moms, although rated R movies were apparently no problem. I found myself  standing in the electronics section debating whether I could live with myself owning a sterilized version of Blink 182’s Enema of the State. I didn’t buy it, and waited for a trip north to Sam Goody. 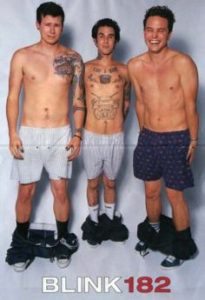 Luckily, I had a lot of family in St. Louis. I started getting into music around 5th and 6th grade, determined to find my own style and taste (which turned out to be corporate pop-punk that some focus group in Los Angeles decided was the best thing for me).

I had to coordinate buying CDs at the mall just right though, so my parents wouldn’t be with me when I purchased the albums, because of the “parental advisory” warning.

My nephew has YouTubed every song that influenced me in my teenage years. He has listened to more live performances of those songs. More covers. Not one word was bleeped or edited. He didn’t have to buy a sterilized album, or deal with hitching a ride to the city. He does it all from his iPad in his house in the Farmington suburbs.

When young people have access to music that inspires them, when the smart ones are free to explore their tastes, a town can change. We are in the early days of this, though, so we just haven’t seen quite how powerful this new internet reality is.

The same thing is happening with movies. Kids and young people can find the indie movies and TV shows that help them rethink relationships and community and career goals. They aren’t being fed focus-group’ed, artificially refined entertainment.

I remember a screamo / hardcore / emo / pop-punk culture that sprung up around Bob-a-Rinos (currently just two buildings down from where I’m writing this). A lot of people remember this. In fact, I was at two shows in the past year where the bands mentioned playing in Farmington. One of them was Taking Back Sunday, and the other was either Senses Fail or Silverstein. I think it was Silverstein (a Canadian band). Silverstein and Senses Fail both played at the Ready Room, and I was drinking a lot of PBR during that show, so I can’t remember exactly which one said they played here, but both of them were around during that time and might have been billed for a show down here.

I’m still not sure who those promoters were. I had a lot of memories at those shows. After Bob’s closed, the Rock House (now the batting cages across from 214) used to do a lot of local shows. I don’t remember as many bigger bands playing there. Many of my friends in their screamo bands would play there.

My nephew doesn’t currently have this local culture waiting for him. That was a weird culture, though. I’m not sure I grieve its passing. I think the model that these shows went for were an unsustainable way of fueling local musicians. I think they were trying to be big city shows.

I think there is an opportunity for young people to begin uniting and playing music together at a public venue. It’s completely unclear what kind of music people around here could unite around. I think it must be something blended, something electronic but also incorporating real instruments, but also a bit remixed, poetical lyrics. I think that remix culture is really in, and I’ve heard some incredible stuff coming from total amateurs. Technology is making this easier.

No matter what happens locally, tomorrow will always be brighter than the days of sterilized WalMart CDs.