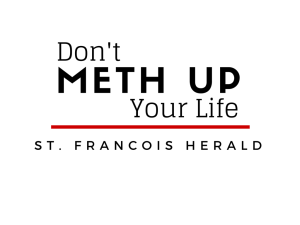 Nestled in the wooded valleys between the waning metropolitan area of St. Louis and the middle-class haven of St. Francois County lies what is affectionately referred to as the Meth Capital of the United States – Jefferson County, Missouri. The prevalence of illegal drugs (but especially meth) in Jefferson and its surrounding counties is so extensive that one Circuit Court Judge said that he views his job as if he’s “in the emergency room.”

In 2013 alone, statewide methamphetamine seizures fell just short of 1,500, ranking third overall (behind Indiana and Tennessee). But what exactly drives our local communities down the proverbial lavatory? What nudges our next-door neighbors into a hopeless struggle to maintain their dependency on such a pernicious substance?

I sat down with a Farmington resident and former meth addict of 2 ½ years to find out what exactly propelled him into a life of very literal insanity. For purposes of anonymity, we will call him “Mr. White.”

Lizette: What made you consider trying meth and what, specifically, did you see as the general appeal?

Mr. White: I’ve tried [many] drugs in general mostly from boredom. There isn’t much in the way of opportunity for someone with no college degree in a small town – and no way to afford one, either with the devotion of time or money. So when I was hired for a better-paying job and started making better money, I started buying more and better drugs. One day, a guy I worked with pulled out a bag if white powder and told me it was meth and offered it to me. I’d [previously] smoked a primo (marijuana laced with meth/coke), so I figured I’d try [meth]. I smoked it and felt like I could do anything and everything at the same time. My mind was perfectly clear and I felt like I was dropping down a roller coaster and about to [have an orgasm] and everything was at super speed forever. I never wanted to stop feeling like that.

L: I can understand your logic. It’s not uncommon for residents of largely rural and/or small town areas to feel easily bored, especially when the only recreational activities involve contributing money to some source, whether it’s a restaurant, a movie theatre, or admission to a bowling alley or arcade. And the vast majority of the time for 20-somethings like us, any money we earn is almost immediately depleted from bills, food, child costs, utilities, rent, etc., not to mention the ever-looming student loans. Was there a point you reached once you began using meth that you realized it was a problem, either financially or personally (or both)?

MW: I realized it was a problem when I found myself standing in [my] yard drinking a beer at 4:30am, waiting for a guy to bring me the [dose] I gave him money for – the same guy that offered it to me the first time – and, over the phone, threatening to kill him if he stole my money for drugs. This guy was getting into the habit of passing out [for days at a time] after being awake for close to 48-60 hours, not to mention, [he was] also working a full time construction job. I went from spending any extra cash I earned on [meth] to spending every last dime I had on it, plus I was living with my father (who was also a user) so I wasn’t really concerned about having a place to stay. I had a place to live, I decided I could live on nearly no food, and I never wanted to stop being high. At the time, it was easily justifiable. Looking back now I know it was a disaster.

L: Having known you since high school, I just can’t picture it. Did you ever engage in other similar uncharacteristic behaviors?

MW: When you’re awake for close to 3 solid days, you start seeing things out of the corner of your eye all the time and you start getting used to it. Then about 5 days in you start getting confused about what time it is and what day you’re on, etc. I played a single video game for 48 hours once and went days without eating. But with every drawback there was something I viewed in a positive light. For example, I drew insanely detailed pictures that I know I could never do now and since I’ve been clean. And you don’t even think about it. I [just felt] on top of the world even though I KNEW what I was doing was NOT normal and in fact very dangerous. I would come down and sleep for 36 straight hours sometimes. Then I’d go right back to it. I stayed awake for 14 days once and I was so scared [that] I’d lost my mind that I almost checked in to a hospital.

L: You were awake for two solid weeks?

MW: Yeah. You really don’t even realize what time or day it is once you reach a certain point, you just go with it.

L: Again, I just can’t picture you in any of these situations. But I think most young people can relate to feeling overly stressed with nothing to do and no money to spend it on.

L: Quick, someone call Buzzfeed! No, I apologize. I must maintain my journalistic integrity here. But speaking of cultural low points, did you yourself ever experience a proverbial “low point” during which you found yourself in immediate desperation to make a positive change? What gave you that motivation to change?

MW: I had a friend invite me to a bar one night and I drank like 17 beers and smoked about $200 worth of dope, then went driving around. There was fog everywhere and I had a cop following me. I pulled over and waved the cop up on me – I pulled a fucking cop over with enough dope on me to kill someone – I realized I was going to prison or jail very, very soon. I found myself screaming at God in the back yard of my dad’s, [asking Him] to give me a way out of this. Shortly after that, I met a girl and had a baby with her and decided that was more important to me than dope.

L: That was the ultimate “long story short…” narrative… “Oh yeah, so then I started a family, no big deal…” Do you care to elaborate on how significant of an impact they had on you?

MW: Well, I stayed nearly blackout drunk for about 3 weeks and ended up getting this gal pregnant. I was with her for a long time but then we split up. Regardless of what happened, I realized that I had people who were depending on me to eat. I had a tiny person who depended on me to bring them to the hospital when they’re sick. They just had an immensely huge impact on my life and my desire to be a better person. But in all honesty, I’ve used [meth] a few times since then, especially when I can’t afford health insurance and because I’m supposed to be taking prescription stimulants for ADD. If I can’t take afford my meds, hey – at least it was a way to cope [with that].

MW: Oh, I know. But I’ve got too many kids now, they come first. Daddy takes a back seat when it comes to them. I’ve got too many responsibilities and I’m not even 30 yet. And I know that if I start using again, I’ll lose them and everything will spiral out of control [much worse] than how it was before. I love them too much. I think that’s the main thing that keeps me going.

L: Do you have any advice for anyone who may be struggling with addiction now? 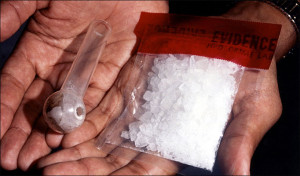 MW: It’s hard to give that kind of advice when I know [it’s still a problem] for me. In total, I was on and off of [meth] for about 2 ½ years. I will never NOT love that high. I think about it literally every single day. The one time I used again after going cold turkey [it caused] a lot of problems in my life – so that’s enough to know it’s toxic and that I shouldn’t go back.

L: For you, what was (or is) the hardest part about quitting and staying clean?

MW: Well, when I quit I felt like I was dying. [It was] like the worst flu ever. But the girl I was with kept me fed, occupied, and obliterated drunk, so it kind of started me down another bad path with [alcoholism]. But it’s the long term effects, the ones that are more subtle, initially; the ones that are the most devastating. For years, I really never felt like I had any real emotions for anything, especially happiness. I still struggle with not feeling “up” enough for my day-to-day. Plus, I have an addictive personality and that doesn’t help my case at all. I [just have to] try and be disciplined. I have issues with impulse control now, which was something I didn’t have an issue with before. I have had to learn not to be so quick to anger because it’s much harder to control my emotions. As you’ve seen, I’m almost schizophrenic, honestly… so I struggle a little more than the average person to live normally. But I’m air-tight, I guess, all things considered.